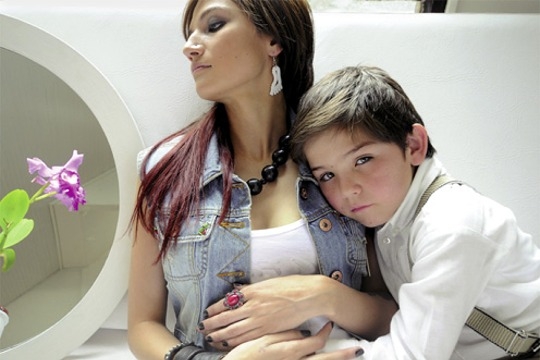 Unlike many other cities where the mansions of the wealthy are to be found in the hills, the well-heeled citizens of La Paz live down in the city’s southern district. Here life goes on in large houses surrounded by stunning parks, undisturbed by noise, polluted air or commotion. It’s a dream world, one immense island of comfort, where two different spheres and perceptions of reality coexist side by side. On the one hand there’s Carola, the mother of Patricio, Bernada and Andrés who are rich and speak Spanish. On the other there is the staff of the house, Wilson and Marcelina, who speak Aymara, the indigenous language of the Bolivian proletariat.
The drama unfolds imperceptibly, without narrative sophistry and hidden twists. The story follows the family’s daily monotony until certain events put an end to their life of plenty. The film concentrates on the last days of an upper class family at a time when the country is gripped by colossal social upheaval.
Juan Carlos Valdivia: “My intention with this script was to move away from Aristotelian structure, i.e. a three-act script dominated by plot. ZONA SUR tells the story of its characters and the events that make up the inertia that leads naturally to the conclusion. I tried to tell an honest story, while taking a step away from easy discourses. This is what I call a Frankenstein family, made up of fragments of personal experiences and of people close to me. Although it is not an autobiography, it is personal.”

Bolivian - Mexican Film Director. He is currently working on his new film "Soren". The filmography of Juan Carlos includes the most recent, Yvy Maraey, presented at the Berlinale and MOMA; Southern District, which was winner of two awards at the Sundance Film Festival, among many others; American Visa and Jonah and the Pink Whale, winner of the Foundation of the New Latin American Cinema Prize, and won the Best Debut Prize in Cartagena. He recently participated in a short films series call "Short Plays" along with other 31 worldwide directors.

In 2013 he was part of Malvinas, 30 Miradas, a project made for the Secretariat of Culture of Argentina. His movies have participated in more than 150 film festivals of renown in the world, he has received an important number of awards and economic support some of the most important film funds of the cinema world. Juan Carlos is a member of the Association of Directors of Bolivia, the Mexican Cinematographic Arts and Sciences Academy, the Directors Guild of Mexico, the General Society of writers and the Actors National Association from Mexico. Southern District (2009) and Yvy Maraey (2012) are two of the "12 películas fundamentales del cine boliviano" (12 12 key Bolivian cinema films) this is a selection made by 50 cinema film experts on 2013. This selection has was made between all the bolivian films produced from 1930 to 2013.