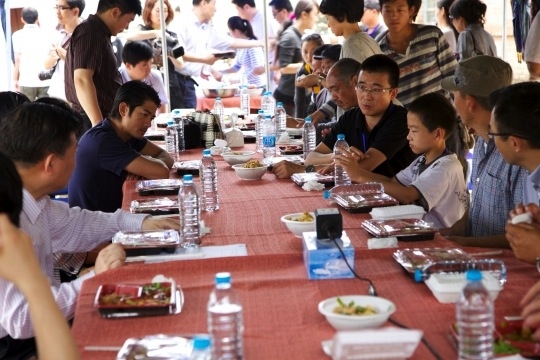 A book about discrimination against Aids sufferers in China provided the inspiration for Chinese director Changwei Gu – who won a Silver Bear for KONG QUE - THE WOMAN at the 2005 Berlinale – to make his latest drama, MO SHUWAI ZHUAN - TIL DEATH DO US PART, a moving love story in which Aids plays a role. Having cast two well-known actors, Zhang Ziyi and Aaron Kwok, as the leads, the director decided to cast genuine Aids patients in supporting roles. Made alongside Gu Changwei’s sumptuous melodrama, Zhao Liang’ documentary records Changwei Gu’s search for these cast members – but the resulting film is so much more than a glimpse of events behind-the-scenes.

Zhao Liang’s film portrays Aids sufferers of both genders; they are all people with very different biographies. As if it wasn’t bad enough being infected by HIV, their suffering is compounded by the fact that in the People’s Republic of China the disease is hushed up and people living with Aids are ostracised. In China, the public at large knows very little about the disease and most people associate the virus with promiscuity. This fear of discrimination forces most patients to hide the fact that they a positive.

The Aids sufferers in Zhao Liang’s film were willing to share their experiences with him. The filmmaker was able to make contact with them via internet support groups; he also visited children with Aids at a ‘red ribbon’ school; but above all, he talked to Aids sufferers during the making of Changwei Gu’s film. It is their presence which lends Gu’s film its particular authenticity.

Zhao Liang was born in Liaoning Province, and graduated from Luxun Academy of Fine Arts in 1992. Living in Beijing since 1993, Zhao Liang has been working as an independent documentary filmmaker as well as a multimedia artist in photography and video art. His films have premiered at Cannes, Venezia, and Berlinale; his art works have been exhibited at the International Center of Photography (New York), Walker Art Center (Minneapolis), Haus der Kulturen der Welt (Berlin), Sala Grande Venezia (Venice), Museo Reina Sofía (Madrid) and numerous film festivals, art galleries and museums worldwide.