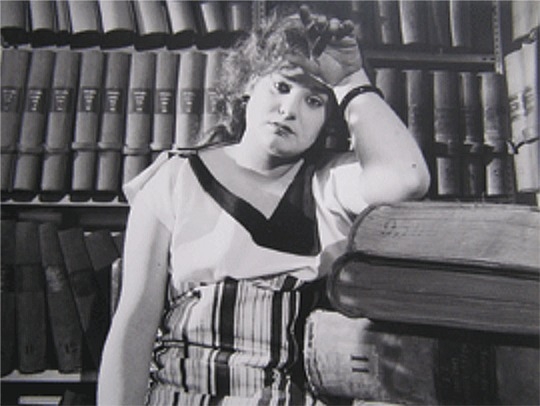 Norma DIn works in the Patent office. her life is dominated by the daily toil at her post and the abstract presentation of inventions that she must read without context. Norma DIN is personally affected by two new patents. She has the job of patenting a music box with a living puppet and a »robot« that will one day replace patent officers like her. Luckily the bureaucratic regulations allow Norma DIN to declare both inventions nonpatentable.

As early as 1984, Monika Funke-Stern plays with a variety of video effects to create virtual reality and reproduction in this experimental film that thematizes »Self-alienation through work«.

Author, director, producer, media artist.
Teaching positions and assistance at the Department of Visual Communication at the University of the Arts Berlin. Foundation of the gallery "Die Werkstatt e.V." Berlin. Free and TV, short and feature film productions. Experimental videos, installations. Planning and construction of the video studio "Confu-Baja Video" together with Gerd Conradt, Hanno Baethe and Hartmut Jahn.
Guest lecturer for video production at the Film and Television Academy Berlin.
Workshops, studios and lectures in Italy, France, Brazil, Ivory Coast, Nigeria, Philippines.
1987-2008 professorship for film/video at the Department of Design at the University of Applied Sciences Düsseldorf;
Participation in selection committees and juries for film and video festivals. Planning and construction of the Betacam studio "Kick On".
2002 nominated for the NRW directing award.
Member of the German Film Academy.
Lives and works in Falkensee near Berlin and Yalta, Crimea.