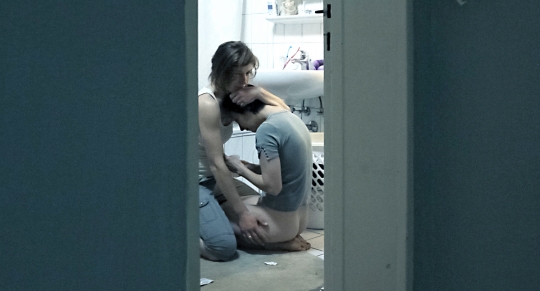 Katja and Isabella decide to have a child. However, like many lesbian couples they soon discover that this is much more difficult than they first imagined. Most of the sperm banks and fertility clinics refuse to treat them, citing legal arguments.Fortunately, they are able to find one doctor willing to help them for a large sum. After a while, Katja decides she wants to call a halt to their ‘project’ on account of the way it is taking its toll on their relationship – not to mention their beleaguered bank balance. But Isabella refuses to give up. She finds a dealer who sells them a kit that will allow them to perform the insemination in the comfort of their own home, and there are plenty of men on the Internet willing to sell their sperm for different sums and sometimes one or two additional conditions. And so they begin ‘casting’ for a potential donor – a process that drags on for several difficult weeks. This fictional story is part experiment and part salutary tale. Containing all manner of sensitive material such as research, statistics, facts, prognoses, dreams and realities, this thrilling work charts the vibrant terrain between fiction and reality.

Born in Erfurt. After training as a youth worker, she worked in theatre in education in London. She took up studies at Film Academy Baden- Württemberg in 2009.