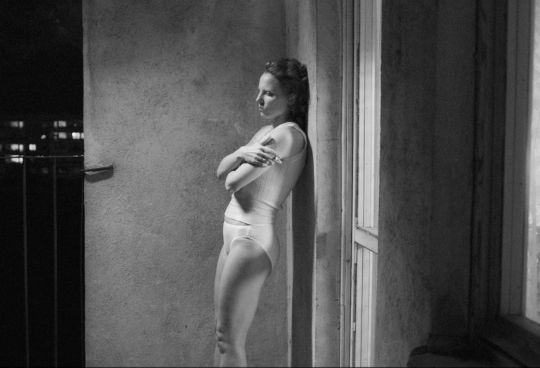 It is the beginning of the 1990s and Polish society is trying to redefine itself after years of stagnation. Schools are being named ‘Solidarno ’, the first West German spa visitors are bringing hard currency into the country, porn videos are doing the rounds and TV constantly repeats images of the trial of Rumanian dictator Ceaușescu. But private emotions remain untouched by these external changes: all the hopes and longings, caught between work, family and religion, desire and abstinence. Tomasz Wasilewski portrays four women in a small provincial town. Agata is attracted to a priest and secretly observes him. Iza is a head teacher who has been having a long-standing affair with a married doctor. Russian language teacher Renata seeks a closer relationship with her young neighbour Marzena who teaches sports and dance, while Marzena herself dreams of an international career as a model. Shot in desaturated colours and with a muted production design, this drama reflects upon the attempts to escape an anti-pleasure, body-hating environment. Wasilewski’s subject is the death throes of a society – and the emotional impoverishment of the individual.

Born in Inowrocław, Poland in 1980, he is a director and screenwriter. A graduate of the National Film School in Łódź, he has been assistant director to Małgorzata Szumowska and at various renowned theatres, as well as writing screenplays for Polish television and directing two feature films. PŁYNĄCE WIEŻOWCE (FLOATING SKYSCRAPERS) won a number of prizes including Best Film in the East of the West Competition at Karlovy Vary.