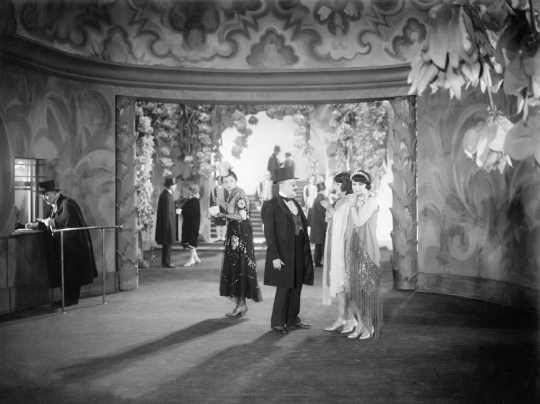 Local representative Traugott Bellmann is a vocal critic of society’s moral decline in general and the notorious nightclub “Heaven on Earth” in particular. Just his luck that he inherits the place – along with half a million marks – and furthermore, on the day, of all days, that he is appointed president of the Moral Decency League! And just his luck that the terms of the inheritance from his deceased brother stipulate that Bellmann has to spend every night from ten to three in the morning in his newly-acquired “den of iniquity”.

Adding to the just his luck scenario is the fact that it all happens on Bellmann’s wedding day, with the daughter of a respectably champagne bottler waiting for her bridegroom in the bedroom ... Shimmy, jazz, and Ziegfeld-style girl revues. With risqué innuendo and effervescent humour, the film turns elements of urbane entertainment into an attack on the 1926 obscenity law. At the same time, it celebrates cinema as a circus medium by elevating small artistes to large presences. Doors slam in the style of Ernst Lubitsch, while star Reinhold Schünzel, who would later direct Viktor and Viktoria, gives us a chic female impersonator as a jazz age gender bend.

Born November 7, 1886 in Hamburg, Germany, Reinhold Schünzel appeared first on screen in 1916. Soon after, he diversified into directing. He made his mark with epic historical dramas like Katharina die Große (1920) which were popular enough to allow him to set up his own production company. Signed by MGM after his move to Hollywood, he directed three films among which stand out the glossy operetta Balalaika (1939).Sometime after 1949, he returned to Germany but found work opportunities scarce. Schünzel died in November 1954 of a heart ailment following a visit to the cinema.

Alfred Schirokauer (1880–1934) was a German novelist and screenwriter. He also directed three films during the silent era. Many films were based on his novels including several adaptations of Lucrezia Borgia. After the rise of the Nazi Party to power in 1933 the Jewish Schirokauer emigrated to Amsterdam and then to Austria where he died the following year.