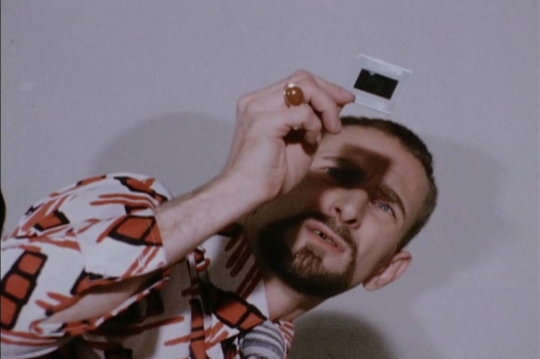 Escape From Rented Island: The Lost Paradise of Jack Smith

In his essay film, Jerry Tartaglia, longtime archivist and restorer of the film estate of queer New York underground, experimental film, and performance legend Jack Smith, deals less with Smith’s life than with his work, analyzing Smith’s aesthetic idiosyncrasies in 21 thematic chapters. “Escape From Rented Island: The Lost Paradise of Jack Smith is a film essay about the artist’s work, rather than a documentary about his life. Therefore, it does not present a rational, linear, and detached explanation of his work. Instead, it asks the viewer to sympathetically experience the aesthetic choices behind the work of Jack Smith. This strategy that I have chosen creates a challenge for the viewer, particularly those who are reliant upon external commentary or non-diegetic material in the documentary film form; I have no apology to offer those who cannot bear the unmediated vision of Jack Smith; only an invitation to join him in his lost paradise.”