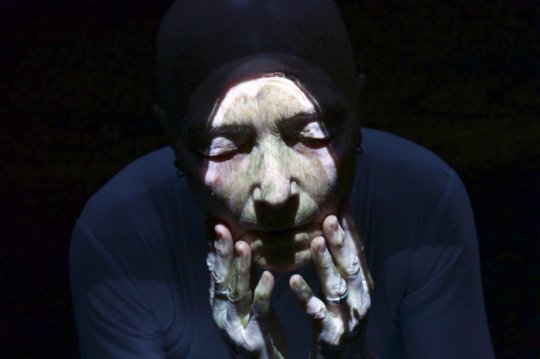 A life lived within the sprocket holes of film can still dance. The beauty of the human body, although maimed, dances forward. Hope does not live eternal but daily. An audience immersed in three screens to feel the encasement of illness, the isolation of the material
body. The forever ongoing chain of film runs but cannot hold up the protagonist. Time is flexible as the body transforms and the film loops. A trilogy of the self, witness of decline and suffering, performing the unthinkable, inevitable, dance of death. Three surrounds,
enfolds, embraces the one who cannot stand alone. We, as human beings on a small globe, united by evolutionary structure and biological DNA have a chance to come together through the experience of empathy and identification with the sensitive body. An
unspoken plea for viewers to engage with compassion, to experience vulnerability, to know through evidence this body is their body.