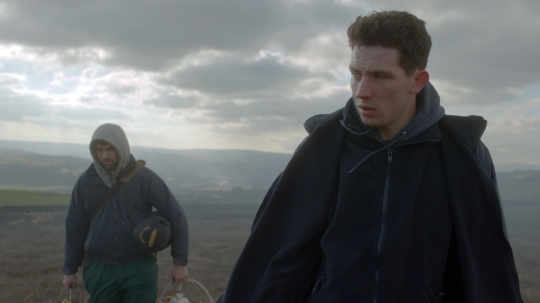 Young Johnny is running his ailing father’s farm in Yorkshire, England. The communication between father and son reflects their adverse living and working conditions, the father’s utterances mostly being restricted to terse criticism of his son. Johnny’s grandmother plays her part stoically. A frustrated Johnny endures his strenuous daily routine. In a bid to escape the harsh daily grind, he has no-strings sex with men, or gets drunk at the local pub. In the spring, a farm hand is taken on for the season. Romanian Gheorghe is the same age as Johnny, who at first eyes him with suspicion. The initial tension between the two men soon gives way to an intense relationship. This opens up completely new prospects but also presents new challenges for Johnny. In his feature-length debut, Francis Lee finds authentic images to depict farm life as one of privation. His film concentrates on the glances and gestures of his characters and their immediate physicality. The archaic landscape of ‘God’s own country’ as the locals call their county, perfectly reflects the turmoil going on inside the protagonists.

Born in Yorkshire, UK where he also grew up, after training at the Rose Bruford College he worked intitially as an actor in theatre, television and film before writing his first screenplay for the short film Bantam. His directing debut The Farmer's Wife and its successors Bradford-Halifax-London and The Last Smallholder screened at many international film festivals and won numerous awards. God's Own Country is his first feature-length film.