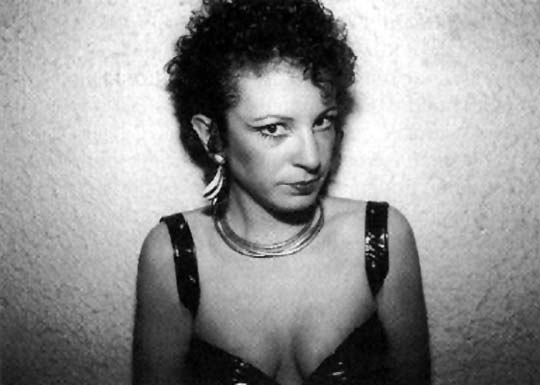 I'll Be Your Mirror

"I used to think that I could never lose any one if I photographed them enough. In fact, my pictures show me how much I've lost." (Nan Goldin)

Synopsis
Nan Goldin is an artist - and a survivor. Her photographies chronicle a life from a middle-class American up bringing, to the wild and liberating experiences of the 1970s New York underground, to the recent devastating impact of AIDS on her community. A collaboration with Goldin, the film is an intimate portrait of one of the world's leading art photographers and a haunting account of the experiences of a generation.

About the film
Through interviews with her closest friends and photographic subjects - and using a combination of Hi-8 video, stills and specially - shot film - Nan recounts her extraordinary life, and the creation of a unique photographic record of her generation. From David - who named her Nan and introduced her to the drag clubs of 1970s Boston, to Sharon - who nursed her best friend Cookie Mueller through the final stages of AIDS to Bruce - who is living with the reality of HIV-infection - Nan's friends reveal their experiences with unparalleled humanity and frankness. I'LL BE YOUR MIRROR features a period soundtrack by The Velvet Underground, Patti Smith, Television and Eartha Kitt, and original footage shot by Patrick Duval (DISTANT VOICES, STILL LIVES).

Nan Goldin about the film

I have wanted to make a movie for a long time, so when I was approached by an independent producer, Adam Barker, to collaborate on a film about my work and life and the impact of AIDS, I was enthusiastic. Commissioned by BBC TV as a segment for their new arts series, TX, I'LL BE YOUR MIRROR is a collaboration of my vision and that of a British filmmaker, Edmund Coulthard. The final result is a cross between documentary portraiture and autobiography. The film is constructed through a combination of Super-8 footage I shot as a teenager, Hi-8 video shot by my friend Ric Colan and myself in 1994 and 1995, a selection of my photographs including excerpts from several of my slideshows, and 16 mm film directed by Edmund Coulthard and shot by Patrick Duval. My voice over was written together with Edmund and incorporates a number of my published texts. The sound track is a compilation of music we listened to at the time including a few songs used in my 'Ballad of Sexual Dependency' slideshow. I'LL BE YOUR MIRROR traces my life from my suburban childhood home which I left early to find my own family of friends. Focusing on five of these friends, whom I've been close to for up to 25 years, it extends the portrait from the individual to the group. Through intimate interviews the camera functions as a mirror in which my friends reflect up on themselves and the changing times we've shared. In the end it is both a self-portrait and a family album, one in which the voices of the people who have been photographed are heard. Being suspicious of the traditional style of documentary film and photography in which the artist is outside looking in, we strived to make a document: from the inside reaching out. Through tracing our specific lives the film remains intensely personal yet speaks to the history of our generation. Told in a diaristic manner and loosely chronological, the film records the beginning of my work in photography starting in 1972 when I was 18 and lived with a group of drag queens in Boston, who were the sexual out laws of the time. It continues with our communal lives in Province town and Boston in the 1970's where our tribe expanded. From there it follows our move to New York City in the late 70's, and our lives in the under ground scene: the drugs, the euphoric crises, the lovers and the battles, the music and the parties. Then in the mid-80's AIDS hit us. This was the zero hour, and the party was over. The glamour of self-destruction wore thin as real death entered our lives so prematurely and so pervasively. Those of us who had stepped over the line from drug use into abuse went into recovery. Survival and friendship became our priority.

The issue of sexualidentity, gender, drug addiction, and AIDS are explored in this film as they directly touch our lives. I'LL BE YOUR MIRROR features David Armstrong, a photographer with whom I grew up and shared many of the most pivotal people and places in my life; Sharon Niesp, a R & B singer who was lovers with Cookie Mueller during the early years and later nursed her through her illness; Bruce Balboni, one of my oldest friends and a recovering junkie who is battling AIDS; and Gotscho, a body builder and sculptor from Paris who lost his lover Jules Dusein.

Through all our experiences, my photography has served as a way to feel grounded in chaos, to pay homage to the beauty of my friends, and to keep the memory of the people loved. More recently, these same pictures have become a chronicle of loss and have shown me how little photography can actually preserve. This film is a meditation on the medium of photography and the nature of memory, as well as a document of one artists work. I'LL BE YOUR MIRROR also functions as the testimonial to the endurance of a community which is still being devastated by AIDS, but whose future continues to evolve.

Edmund Coulthard about the film

Long before I ever saw one of her slideshows I was first drawn to Nan's work leafing through a copy of 'The Ballad of Sexual Dependency' in a New York bookstore. I remember being intrigued and very moved - especially by the courageous honesty and vulnerability of the pictures of Nan herself. As an English man my life has been very different from hers, but there was a quality here which seemed to speak of my passion, my pain. I still think it's the most extraordinary sequence of photographs I've ever seen.

It was some years later that I found myself developing documentary ideas with my producer and partner in Blast! Films, Adam Barker. Two things we had both been feeling for sometime were that divisions between films about the arts and 'social' documentaries had really become redundant, and that we were both excited by the possibility of working with artists rather than making films which simply tried to explain them. It was John Wyver, having created a new BBC arts series called Tx, who gave us the chance to put these thoughts into practice.

The idea of making a film with Nan started off very simply as an idea to let some of the people in Nan's photograph - including, of course, Nan herself - speak for themselves. But we knew that a lot of Nan's friends had died and that AIDS had completely changed her life - both personally and as an artist. Having spent time talking with Nan and seeing her powerful narratives charting the deaths of some of those who were closest to her, it was clear that the impact of AIDS was to play a very central role in whatever film we were to make. In the end, I'LL BE YOUR MIRROR is a film both about Nan's life and the terrible legacy of AIDS. Increasingly, as we worked on it, it became also a reflection on the relationship between photography, memory and loss. It's a film that was made both from within and without Nan's world and what was crucial for me was to find ways of translating the emotional resonance of her work into film. In trying to achieve that, I was helped immeasureably by the huge creative talents of the cameraman, Patrick Duval and the editor, Paul Binns.

It wasn't easy to make, not least because my approach to film-making is rooted in a British documentary tradition and Nan, as a creative artist, has evolved her own, highly idiosyncratic way of working. But we shared a common goal and I always felt that her notion, that her pictures' come out of relationship, not observation', crystallized something at the heart of the best documentary film-making. I learned a lot and never ceased to admire her courage in putting herself on the line or, above all else, her fierce honesty.