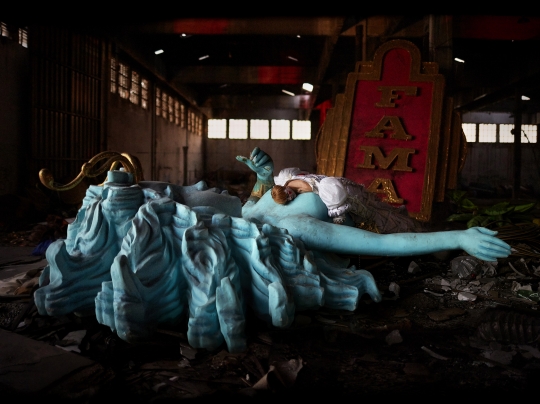 Slowly and elegiacally, the camera glides at first over a forest shrouded in fog, then over a panorama of Rio de Janeiro. An off-screen voice tells us that Rio is a factory of dreams and nightmares, a city of transformations. In her essayistic film Obscuro Barroco Greek director Evangelia Kranioti explores the poetic words of her transgender narrator Luana Muniz, who is herself an icon of Brazil’s queer subculture. Amidst a somnambulistic tide of images she enters the pulsating world of creatures of the night. A stream of consciousness from Brazil’s underground flows straight into the heart of the city’s street carnival. In between the masks and the make-up, the young, naked and new bodies and a spectacular firework display, people come into view who have undergone a transformation that makes it difficult to clearly ascribe them to any gender. A white clown leads us through the film’s visual universe in which, all of a sudden, raw-faced anti-government protests also put in an appearance. And then, behind closed doors, all is bared, the ‘transvestites’ are serenaded and celebrate who they are until the dream culminates in one ecstatic dance.

Born in Athens, Greece in 1979, she studied law at the National and Kapodistrian University of Athens as well as piano at the city’s National Conservatory and visual arts at the École nationale supérieure des Arts Décoratifs in Paris. In 2014 she graduated in film at Le Fresnoy. Since 2007 she has been presenting her artistic work –photographs, installations and films – in exhibitions across Europe, the USA and Japan. Her feature film debut Exotica, Erotica, Etc. screened in the 2015 Forum. She is currently studying screenwriting at La Fémis in Paris.