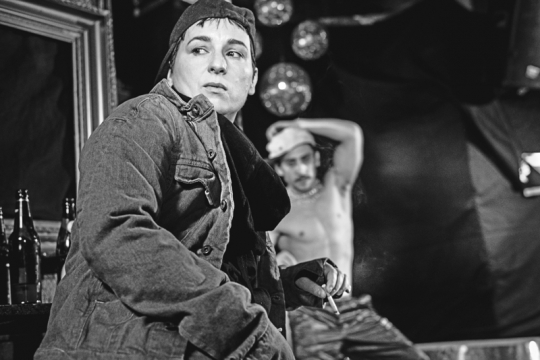 In 1912 the actress Albertine Zehme asked the composer Arnold Schönberg to set to music part of the Pierrot Lunaire-poems by the Belgian Albert Giraud: For five musicians and a female singer Schönberg arranged 21 of the 50 poems to become one of his ground-breaking works for music theatre. In 2011 the conductor Premil Petrovic asked the filmmaker Bruce LaBruce to direct a stage version of Pierrot Lunaire with actress Susanne Sachsse singing and performing in the title role. The concept for the stage production is grounded in Schönberg’s understanding of cabaret, which took him to a dreamworld, full of “decadent longing, guilt, rapture and fear”, endowed with horror scenarios and an ironic-satiric humour. In 2013 LaBruce took Pierrot Lunaire to the streets of Berlin to film a dark story of longing, love, and transgression. This film features a soundtrack with Petrovic’s interpretation of Schönberg’s musical melodrama, sung by Sachsse. Based on a true story, LaBruce’s Pierrot Lunaire lends an appropriately radical queercore vision to one of the most innovative contributions to atonal music.

"While I listened to the music of Arnold Schönberg I tried to associate a concept that would match well with the mood of his atonal music on the one hand, and on the other hand could be combined with the poems by Albert Giraud in a more contemporary context. From the jungle of thoughts of my unconscious rose a story that is supposed to have happened decades ago in Toronto, and that is both odd and universal […]: A young girl that regularly dresses as a boy falls in love and seduces a young girl that has no clue that her lover has the same sex. When the girl introduces ‘her boyfriend’ to her father he becomes skeptical and unmasks the fraud [and] does not allow them to ever see the other again. Furious and delusional the ‘boy’ develops an adventurous plan to prove his true ‘masculinity’ to the father of his lover." (Bruce LaBruce)

Bruce LaBruce is a filmmaker, photographer, writer, and artist based in Toronto but working internationally.

Born in Southampton, Canada in 1964, he attended film school in Toronto and studied film theory at York University. His film Hustler White screened in the Panorama in 1996 and was his first international cinema success. His work has often featured in the Berlinale, most recently Pierrot Lunaire which screened in the 2014 Forum Expanded and won the Teddy Award. He has also directed numerous music videos and theatre plays and contributes writing and photographs to international magazines, newspapers and websites. His work as an artist has appeared in numerous international exhibitions.