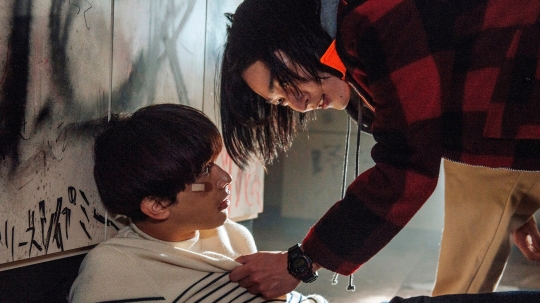 Tokyo, 1994. In a video interview a young woman discusses the significance of a teddy bear. Shortly afterwards, a burning object falls from a high-rise building at night. A young man, naked and bound, falls out of a locker. Two fisherman talk about a water spirit. In his unusual drama River’s Edge Isao Yukisada lays many trails and jumps as abruptly and unpredictably between the various narrative threads as do his characters: Ichiro is gay; he is preyed upon by his violent fellow pupils but seems to draw strength from his injuries. He makes a gruesome discovery at a nearby river polluted by industrial waste and shows it to his best friend, a girl named Haruna. Kannonzaki loves rough sex and in the course of it transgresses more and more boundaries. An introverted girl obsessively reads her pregnant sister’s diaries and Kozue, a model with bulimia, buries herself in mountains of food at night. All these and other stories are brilliantly interwoven into a breathless social portrait of a driven but apparently lost generation and their seemingly unavoidable encounters with violence.