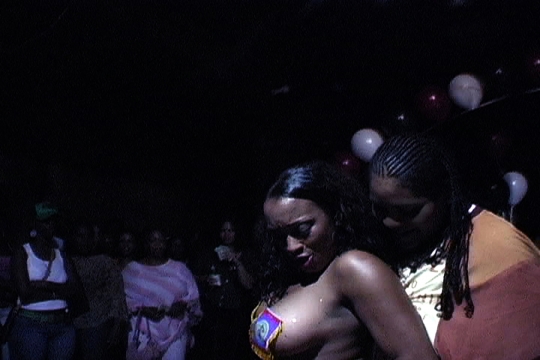 ‘Shakedown’ was a series of parties founded by and for African American women in Los Angeles that featured go-go dancing and strip shows for the city’s lesbian underground scene. Inspired by transwoman Mahogany who, as the mother of the scene, presided over queer strip shows and balls for non-heterosexual audiences in the 1980s, butch Ronnie Ron created, produced and presented the new shows. In them, the largely female clientele from the ‘hood’ slipped dollar notes into lap dancers’ panties while celebrating lesbian sexuality to pulsating hip-hop beats. Showing the protagonists backstage and in interviews, this intimate chronicle reveals that ‘Shakedown’ was more than just a strip club; as one of the few spaces for lesbian subculture, the club brought together and galvanised a community of freaks and queers of colour, and for that it suffered police reprisals. The film’s director is herself a member of this community; using exclusive archive material, posters and flyers, her film takes a personal look at female desire that is rarely presented on the big screen.