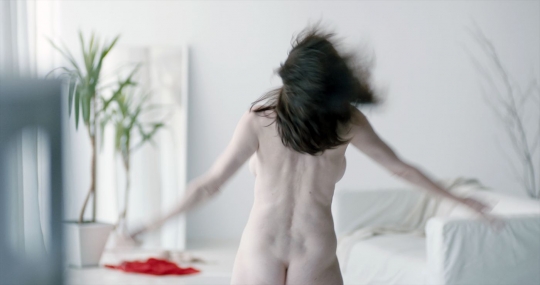 Laura cannot bear to be touched and recoils whenever anyone catches hold of her or takes her hand. She goes to see a therapist, and orders a male prostitute, but her body is still like an armour. In a loose succession of scenes, we follow other people in search of intimacy. Christian, who has to live with many physical impairments, talks candidly about what turns him on, what turns him off and his love life with his long-standing girlfriend. The couple participate in a workshop on body awareness attended by people of all ages, with and without disabilities, such as Tudor. His bald head makes him seem strangely vulnerable and he has yet to discover and accept the manifold forms of his desire. The cool images and laboratory-like atmosphere of this film help the viewer to jettison their own preconceived opinions and ideas of intimacy, as it takes us on an emotional expedition to illuminate the many different facets of sexuality beyond all taboos. Each scene develops its own sense of truthfulness, regardless of whether the situations have been staged or present documentary footage.

This Romanian artist and director graduated from the Caragiale University of Theatrical Arts and Cinematography in Bucharest in 2008. Her films have won several awards including the Zonta Prize at the 2013 International Short Film Festival Oberhausen for Diary #2. Poised on the border between fiction, documentary and fine art, her work is characterised by a highly individual visual style, the courage to experiment with visual language and an uncompromising exploration of the human psyche. Since 2010 she has been the curator of the Bucharest International Experimental Film Festival (BIEFF).