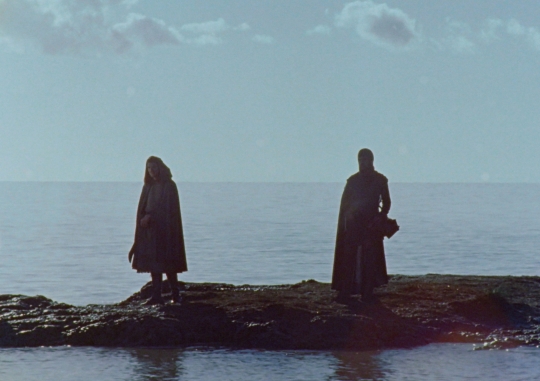 A mystical place, an enchanted story: A group of knights, imported directly from the Middle Ages, go ashore on the banks of the Río De La Plata. They are searching for a grave where they wish to perform a ritual. As they pass through the jungle, things happen that cause them to land in the present day. They have sex, find a car, enjoy a sunset with beers in their hands. Then an announcement comes over the radio that makes everything appear in a different light, and there’s no going back. This past summer demonstrations took place in southern Argentina against the Italian fashion and textile company Benetton. The company owns enormous tracts of land there that originally belonged to the Mapuche people. The indigenous Mapuche have been trying to get their property back for years
in order to live in a self-determined manner. The protests were associated with excesses on both sides; Santiago Maldonado, who demonstrated with the Mapuche, disappeared in their midst. “Never again” was the widespread sentiment at the end of the dictatorship in Argentina, now the old threat seems to be looming again. There is no escape from reality – one has to face up to it. The filmmaker breaks open prevalent stereotypes in order to tell his own story free of hegemonial interference.

Born in 1990 in Bariloche, Argentina. He studied art as well as film and photography and works as a filmmaker, performance artist and musician. He works with Super 8 and 16mm film and is a member of the analogue film collective LaborBerlin.