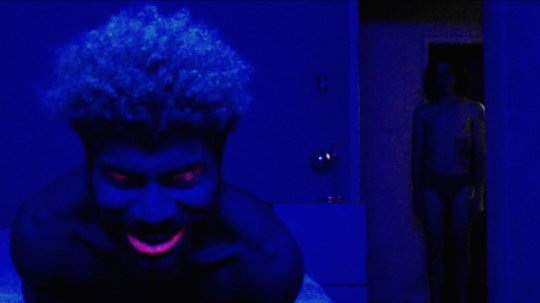 Pedro earns a living in chat rooms. The image resolution may not be perfect but when Pedro transforms himself into NeonBoy in front of the webcam he still manages to create the desired impression. Slowly, this young man dips his fingers into pots of coloured paint and glides them across his naked body. Glowing in the dark, NeonBoy follows his users’ commands until he agrees to meet one of them in a private chat room for money. But things change when Pedro’s sister Luzia moves out of their shared apartment and he notices that somebody is imitating his performances. He agrees to go on a date with his mysterious rival. This rendezvous will have far-reaching consequences. As with all of the previous films by directing duo Filipe Matzembacher and Marcio Reolon, we find ourselves again in Porto Alegre in northern Brazil, where we encounter young queers in search of intimacy, community and security. The elegantly interwoven virtual images and protagonists’ stories may take us away from the real world, yet in actuality we remain in an increasingly homophobic Brazilian society to whose misfits this sensitive, affectionate portrait in three acts is dedicated. nnvonih