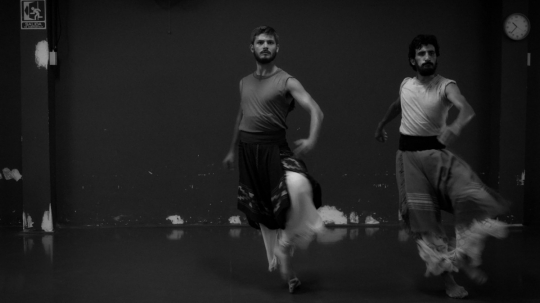 Dignified, strong and formidable, and oozing erotic attraction: young malambo dancer Gaspar is at one with his passion for dance that he has made his profession. But, as director Santiago Loza makes clear at the beginning of his film, the Argentinian competitive dance malambo is an uncompromising battle against time. This is a dance to which you devote your entire life and, even if you should happen to win the top championship joust, you are henceforth condemned to training the next generation or to appearing in nightly cruise shows, for there is no possibility to take part in this competition again. Loza’s contrasty, magical black-and-white images whisk us away into the world of Argentinian gaucho dance. Billed as a fiction, his film comes across as a mixture of documentary, fairy-tale, biography and essay in which he juxtaposes the beauty of the dance battles with the harsh realities faced by the dancer himself. Gaspar’s devotion begins to take its toll on his body. There seems to be no longer anything else but malambo. In his few rare encounters with life beyond the dance floor Gaspar meets family members, competitors and his flatmate – all in the heat of his tiny apartment.

Born in Córdoba, Argentina in 1971, he studied at the Universidad Nacional, the Escuela Nacional de Experimentación y Realización Cinematográfica (ENERC) and the Escuela Municipal de Artes Dramáticas. His debut feature film Extraño won the Tiger Award for Best Picture at the International Film Festival Rotterdam. His experimental, documentary and feature films have screened at Cannes, Locarno and Buenos Aires and have won several awards. In 2013 his film La Paz screened in the Forum, in 2018 he presented Malambo, el hombre bueno in Panorama. Alongside his work as a film director, he is also a screenwriter and playwright.