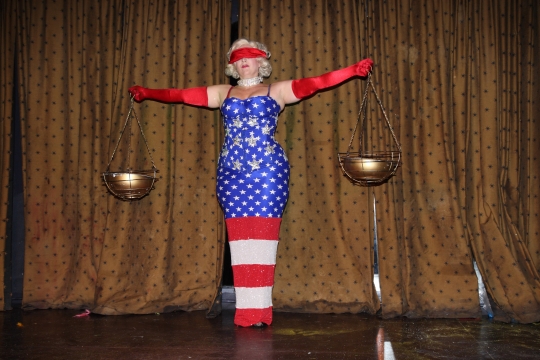 In her previous work, underground artist Beth B has often addressedsuch topics as sexual repression and boundary transgression. In EXPOSED, she leads us through New York’s 21st century undergroundwhere classic burlesque – usually catering to the male gaze –  is being radically redefined, prevalent sexual clichés are interrogated,and deeper meanings are teased out in a humorous and sometimes shocking way. From its founder James Habacker, we learn about the birthplace of neo-burlesque at the Slipper Room, one of the few remaining subversive venues on the Lower East Side; and the performers discuss their bid to do away with binary sexual roles and body stereotypes.The film’s mixture of exclusive footage of live performances and intimate backstage interviews reveals a hidden world, in which the pleasures of exhibiting a (less than perfect) body and of transgressing sexual and gender boundaries are celebrated, and war is declared on society's norms.

Born in New york in 1955, Beth B began directing Super-8 films in the 1970s. Her work, which is usually multimedia, focuses on body image, gender and the outsider. Her films VORTEX and SALVATION! screened in the Forum in the 1980s, and VISITING DESIRE in the Panorama in 1997. Her work has screened at MoMA, Sundance and Toronto.

Beth B @IMDb
Trailer
Interview with Beth B "Exposed"