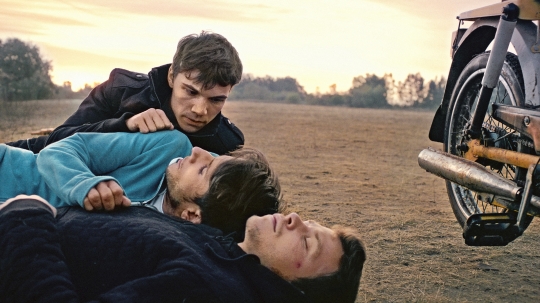 Szabolcs, a young Hungarian footballer, plays for a German team and is good friends with his roommate Bernard. But the training proves to be too hard for him and, after losing a game and quarrelling with Bernard, Szabolcs decides to return to Hungary. In search of a new start in life, he decides to keep bees on his grandfather’s farm. But then Áron, a stonemason’s apprentice from the nearby village arrives on the scene, and suddenly all thoughts of an uncomplicated life disappear. Together they renovate the dilapidated farm and before long their initially matey relationship turns into a love affair. But while Szabolcs begins to accept his sexual identity, things soon become disastrous for Áron: the reactionary villagers get wind of their outrageous behaviour and even his mother turns her back on him. Bernard comes for a visit and tries to persuade Szabolcs to return to Germany. For a while, an idyllic ménage à trois ensues. But when Bernard leaves, Szabolcs decides to stay on with Áron: there’s no way he can leave him behind in such a repressed and intolerant environment.

Born in Hungary in 1978, he studied at the University of Theatre and Film Arts (SZFE) and made his first short film 1 HÉT (SEVEN DAYS) in 2003. In 2008 his short film GYENGÉBB NAPOK (WEAK DAYS) screened at the Hungarian Film Week where it won Best Short Film; it also screened at FIPA in Biarritz. This work was followed in 2009 with ÜNNEP (CELEBRATION) which screened at Warsaw Film Festival and Brest Short Film Festival. Császi also directs commercials and music videos as well as painting and writing poetry.