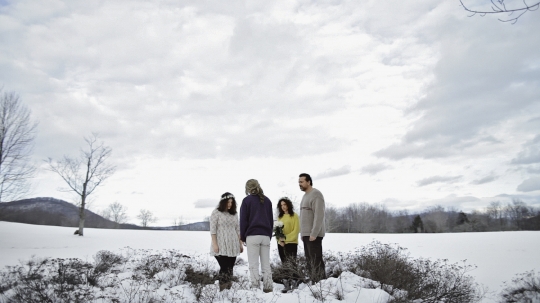 A group of people dance at a sports ground to the music of Supertramp. The siblings take flowers to a grave in the deep snow, wearing floral wreaths in their hair. The father directs them. They embrace one another. Memories are invoked by pictures enclosed inside Gabriel's, the brother's, amulet. The mother is dead - how will they fill the void she left behind? Each individual family member tries to find their way, is obliged to redefine their course. Calm are the images and gestures that lead us through this film. The colours of night are also the colours of mourning. Mystical imagery and thoughts tangibly resound in the here and now. Who has the stronger powers of recollection - the horse or the elephant? Of the utmost importance however, is the question of how to proceed with the mother inside one's heart. "There are times, when all the world's asleep, the questions run too deep for such a simple man, won't you please, please tell me what we've learned, I know it sounds absurd, but please tell me who I am." (Supertramp)