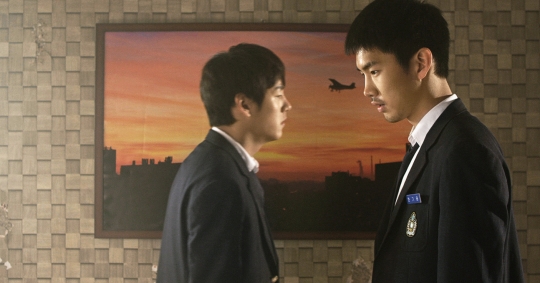 After a tryst with a lover in a derelict, condemned building housing the ‘Night Flight’ gay bar, Yong-ju roams the streets of night-time Seoul and bumps into his ex-best friend, Gi-ung. They were once in the same class but have long since gone their separate ways. Having become embroiled in a fight, Gi-ung snatches Yong-ju’s bicycle in order to escape and doesn’t give it back. Yong-ju threatens him, but Gi-ung is impervious to his warnings – his gang is notorious for their cruel bullying of an eccentric classmate named Gi-taek. His attempts to regain their old friendship mean Yong-ju also runs the risk of becoming a target of this terrorising clan, but he refuses to give in. Instead, Yong-ju cleverly draws Gi-ung into a power game of mutual humiliation and burgeoning memories which triggers a dangerous emotional duel. The director of last year’s Panorama film White Night has chosen anonymous and abandoned urban spaces in which to depict the emotional turmoil gripping the two schoolboys. His film is a portrait of a society being eroded by the compulsion to achieve, a society in which there is no place for minorities, friendship or passion.

Born in South Korea in 1971, he studied filmmaking at the Independent Film Society. Between 1995 and 2000 he was a member of the independent film group ‘Youth Film’ and made a number of short films which screened at national and international festivals. Today he is one of Korea’s best known Queer Film directors. His feature debut NO REGRET and his film BAEK YA (WHITE NIGHT) screened in the Panorama in 2007 and 2013 respectively.