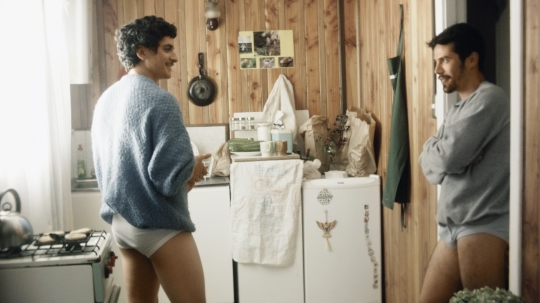 Lucas and Antonio. Two young men meet and fall in love in a remote fishing village in the south of Chile. One lives there, the other is visiting. Sensuality dictates the pace of the narrative and the lives of both in the days to follow: Being one another’s mirror. Recognising one another. Yielding to one another. When the village rebels against their love, the experience of this limitation marks a momentous step in Lucas’ and Antonio’s adulthood.A simple story of love and devotion, shot in the style of Direct Cinema. A not-so-simple setting, in Chile’s Deep South, where anything that breaks out of the perceived norm is to be destroyed immediately, punished. The characters know of the limitations within the village. The romantic notion of resistance is brief; of greater importance are life and the love that is found. Going further. Going beyond the self.

Born in Santiago de Chile in 1985, he studied film at New York University, graduating in 2014. In 2012 he directed ON LEARNING OF A FRIEND’S ILLNESS, part of THE COLOR OF TIME, a collective project which premiered at the Rome Film Festival in the same year. A founding member of the Santiago-based production company Cinestación, he currently lives and works in Santiago and Brooklyn.