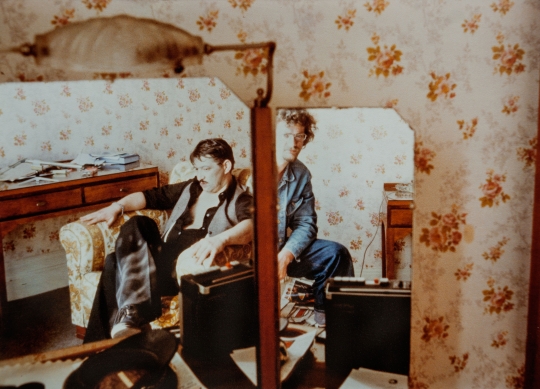 Rainer Werner Fassbinder was probably Germany’s most significant post-war director. His swift and
dramatic demise at the early age of 37 in 1982 left behind a vacuum in European filmmaking that
has yet to be filled, as well as a body of unique, multi-layered and multifarious work of astonishing
consistency and rigour. From 1969 onwards, Danish director and film historian Christian Braad
Thomsen maintained a close yet respectfully distanced friendship with Fassbinder. Fassbinder -
Lieben ohne zu fordern is based on his personal memories as well as a series of conversations and
interviews he held with Fassbinder and his mother Lilo in the 1970s. The film also contains current
interviews with Irm Hermann and Harry Baer, both of whom were close to Fassbinder. Beginning with
Fassbinder’s extraordinary childhood in traumatised post-war Germany, the film, which is divided
into seven chapters, provides an illuminating, intimate and moving tribute that bears witness to the
enduring relevance of both the man and his work. Today in particular his oeuvre continues to provoke
us to engage with controversy and tension – be it aesthetical, creative or critical.

Born in 1940, he made his debut at the Venice Film Festival in 1972 with DEAR IRENE. Alongside feature films he has also directed documentaries about Karen Blixen, amongst others, and has written numerous books about film history greats such as Hitchcock, Pasolini and Godard. In 1984 his LADIES ON THE ROCK received a special screening in the Berlinale Competition. His film THE BLUE  MONK won the Carl Th. Dreyer Prize in Copenhagen in 1999.