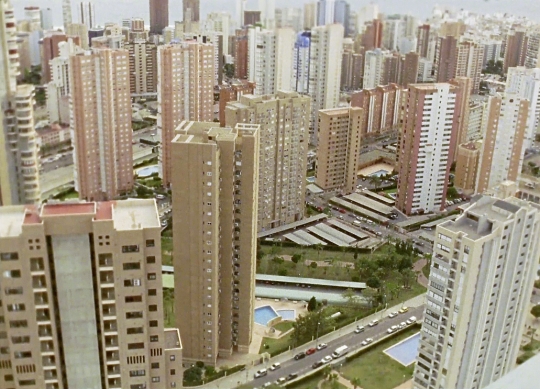 The year may be 2052, yet this is a future with one foot in the past. Between the strangely artificial skyscrapers along the coastline and the neon-lined broadwalk, there’s nothing here to suggest it isn’t still 1975, 1995 or 2015. But there are fewer people around nowadays and many apartments lie empty, a tranquil wasteland of exposed wires, unfinished plasterwork and endless dust. Those that remain are at least house-proud, eager to show off their knickknacks and traditional costumes, when not meeting up for the occasional dance. Hardly the most obvious place for a bounty hunter, but the robots still need to be exterminated, particularly as they already look so much like you and me. Ion de Sosa’s spare, enigmatic adaptation of Philip K. Dick’s "Do Androids Dream of Electric
Sheep?" is at once a minimalist genre piece, an oblique treatise on difference and an essayistic almost-documentary on the unreal status quo of contemporary Spain. And as the title suggests, these androids do indeed dream: of far-off places and new opportunities; of the songs of past summers; of a shared embrace, a sheep on a leash, as the towers and mountains open out beyond.