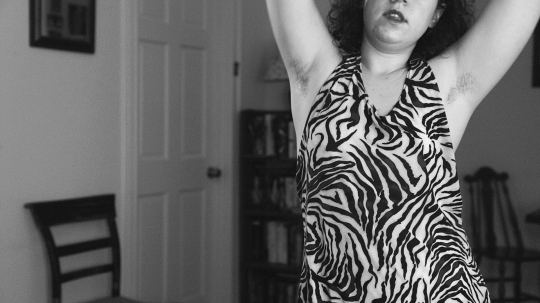 Interior, Day. Matt and Isabel lie in bed, naked. They have sex. She sits on top of him; they surrender to one another passionately. Joanna, the flatmate, enters the room and sits on the corner of the bed, close to them. Isabel and her boyfriend continue undeterred. Matt (after a while, without glancing sideways): What is she doing here?Joanna: "I can’t sleep."Isabel (without stopping having sex): "Were we too loud?"Joanna (without moving to leave): "No." Bad at Dancing is a chamber piece and a comedy. A sex game. Isabel and Matt are together, Joanna would like to be with Matt. Joanna tries out various approaches to achieve her aim. The three move together, embracing from body to body – dressed and naked. Always introversive. Always direct. Envy and emotion are given a surreal context. The question of borders and their necessity is raised anew. A rickshaw always drives on three wheels.

Born in New York City, she studied film at Wesleyan University. Her documentary feature I HATE MYSELF :) gained a lot of attention and screened at numerous underground film festivals. She has won many awards for both her documentary and fiction work and has also acted in a number of films.