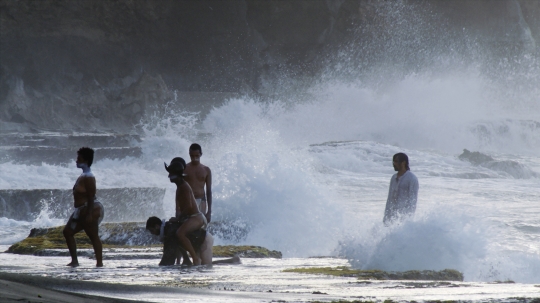 In 1511, indigenous people in Puerto Rico seduced and murdered a representative of colonial power.
Some 300 years later, a further chapter of colonial history: In 1803, by order of the Spanish Crown,
a doctor named Francisco Javier de Balmis travelled to Puerto Rico with a number of orphans. They were carriers of the live vaccine with which Balmis executed one of the first mass immunisations against smallpox. A glance to the present day: In 2014, Puerto Rico produced an enormous amount of pharmaceuticals with subsidies from the USA. By interweaving strands of colonial and postcolonial history, the filmmakers of La Isla está Encantada con Ustedes have created a lyrical work that
mirrors and completes the dynamics of power and lust. A modern roundelay, that restages the past in the present. Lead by a gaze of sexual subtext, this is a comedy in which reality is subordinate to strategies of power –while revealing the closely intertwined nature of health and economics, in the past and present.

Born in the USA in 1984, he studied film at New York University and graduated with a BA in Fine Arts. He has made a number of short films and two feature films which have all screened at numerous international festivals.

Born in the USA in 1984, he began studying art at The Cooper Union in New York in 2006 and completed his studies with an MFA from Columbia University in New York in 2011. Working as a fine artist and film director, he made his film debut, THE UNITY OF ALL THINGS, in collaboration with Daniel Schmidt. One of his film installations was exhibited at the Biennale of Moving Images in Geneva in 2014.