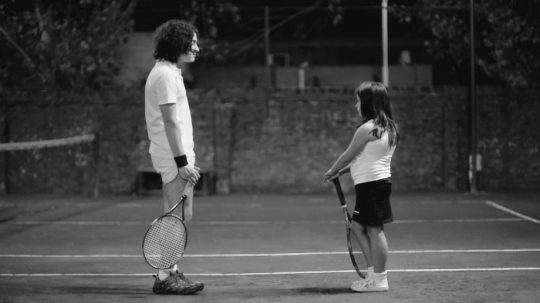 The Mad Half Hour

Once a day, domestic cats go completely mad. A total burst of energy. It’s all over within half an hour.
No one knows why. That’s just how it is.Juan is rather similar. He doesn’t know why, it just seizes
him. The loss of commitment. Why should he bother to hit a ball over the net and wait for it to be
returned, while making sure it stays within the white line? Does he still love Pedro, no, perhaps yes?
Pedro is used to it and takes him by the hand. They venture into the night together and stray, likes
cats, through the streets of Buenos Aires. Far more than pursuing narrative logic, the film follows
human feelings without ever fully relinquishing the threads of the storyline.

Born in Buenos Aires, Argentina in 1978, he studied film at the University of Buenos Aires before training as an actor with the theatre director Ricardo Bartis. He has made a number of award-winning short films and has acted in various independent productions. In 2013, he directed his debut feature film NIGHT.