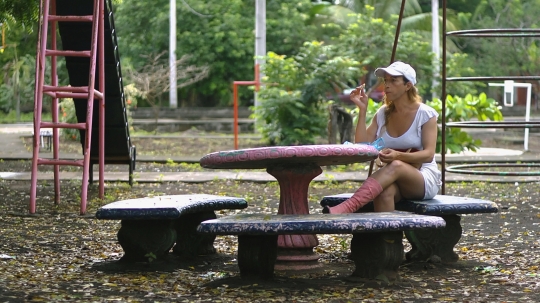 At the tender age of twelve, Roberto supported the Sandinista revolution in Nicaragua and fought
for education and social reforms. He was to continue his political struggle fighting alongside the
communist Tupamaros in Uruguay. Thirty years later he is struggling to live his life as a woman
named Stephanía and striving to be accepted by both society and his family. Documentary filmmaker
Aldo Garay has followed Stephanía for over twenty years. In El Hombre Nuevo he provides a
personal and tender portrait of a woman who can look back on a tempestuous life in which violence,
drugs, prostitution and political commitment all found its place. Scenes from her day-to-day life are
interspersed with interview material that includes conversations with old friends, fellow-travellers
and siblings, as well as a passionate, heated exchange with her mother. The picture of society that
emerges is as diverse as it is intimate, and spans a time of great political upheaval in the 1970s to
the present day.

Born in Montevideo, Uruguay in 1969, he has directed four documentaries and one feature film and has been jury member for various competitions and film festivals.