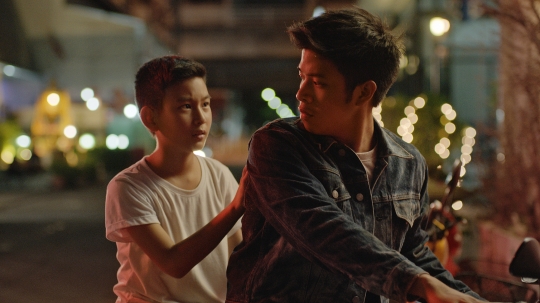 The poor outlying districts of Bangkok are a world where you grow up very quickly. After both their parents die, eleven-year-old Oat, his little sister and his older brother Ek move in with their aunt. Ek works in a bar for male prostitutes and transvestites. His relationship with Jai, the son of rich parents, began when he was still at school. Their uneven love for one another is put to the test when the day of the annual conscription arrives; this is when a lottery decides who must do military service and who can stay at home. Young Oat steals money from the local mafia boss in order to buy their beloved brother and family breadwinner out of the army. His actions have dramatic and traumatic consequences.Told from the younger brother's point of view, the film takes a refreshingly unadorned and impartial look at an essentially loving environment where social conditions are governed by
venality, corruption and false ideals.

Born in Texas, USA, he is a Korean-American filmmaker currently based in Asia. He began as an intern at National Public Radio in Washington, D.C. before moving to CNN in Hong Kong. He was co-producer of the Korean remake of John Woo’s BETTER TOMORROW which premiered at the Venice Film Festival in 2010. He then directed videos for Google, UEFA and Elite Models. He recently founded the micro-documentary web-series GOOGLE GLASS DIARIES which has been featured in the Wall Street Journal and Fast Company.