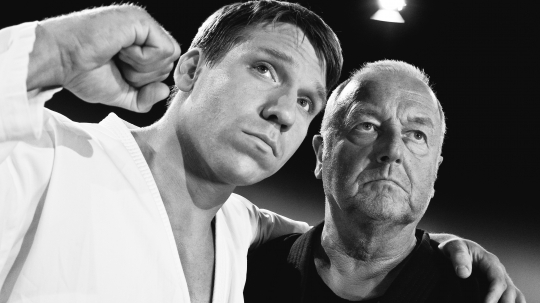 When karate champ Andreas Marquardt thinks about himself he feels nothing but bitterness: ‘I refused to feel anything. I was cold, like a block of ice, I couldn’t give a shit about anything.’ When he was two years old, his father poured water over him and put him outside on the balcony in subzero temperatures. Another time he crushed his hand. When he was six, his mother began to seduce him: ‘Your prick belongs to me, my little friend.’ Later, Andreas became a pimp and earned millions – until he wound up behind bars. Lovely Marion was the only one who stood by him, who went on the game for him, and gave him the courage to go on … Interspersing interviews with dramatized scenes from Andreas Marquardt’s biography, Rosa von Praunheim describes a life that veers from fear and humiliation to contempt, hatred and brutality. Filmed in stylised sets replete with photographic wallpaper that recall West Berlin décor at the time, the film provides a shocking insight into the deep wounds caused by domestic violence and one man’s desperate attempts at resistance. Is it possible to break out of such a vicious circle? And how does Andreas Marquardt cope with these experiences today?