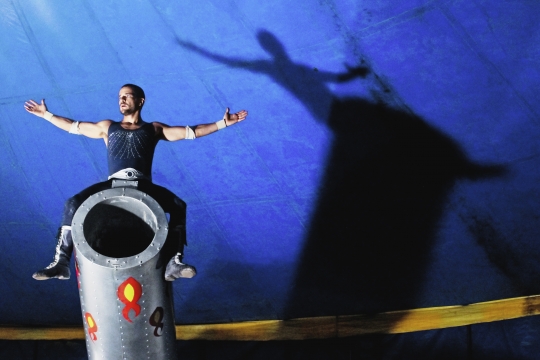 A ship with a circus on board approaches an island in the South Atlantic. During the evening performance the ringmaster and illusionist Kaleb presents an artiste named Zolah who immediately wins over the hearts of everyone in the audience. Zolah is Pedro, who left the island twenty years previously at the age of nine. His reunion with his mother Rosa and his introverted sister Raquel brings the well-travelled acrobat face to face with old wounds and buried dreams. Raquel’s world is the sea, and she always retreats to its depths. She wishes that Pedro could be a part of it. Questions begin to present themselves to Pedro. Why did his mother send him away all those years ago? Whilst islanders and circus artistes enjoy a lively exchange, Pedro and Raquel seek out a place of their own.
Feelings of guilt, rivalry and burgeoning pride soon become a challenge for the whole family. Lirio Ferreira explores these siblings’ willingness to take risks in images of impressively virtuoso circus acts, combining these with elements of classical tragedy and magical images of the sea to create a brilliant cinematic experience.

Born in Recife, Brazil in 1965, he studied journalism at the Federal University of Pernambuco (UFPE) and then worked as an assistant director in the theatre and for film. He made his first, award-winning short film O CRIME DA IMAGEM in 1992. He has directed a number of music videos for artists including Nação Zumbi, Paralamas do Sucesso, Kid Rock, Daniela Mercury, Alceu Valença and Afroreggae. After taking a long break from fiction filmmaking, he returned to make the feature BLUE BLOOD.