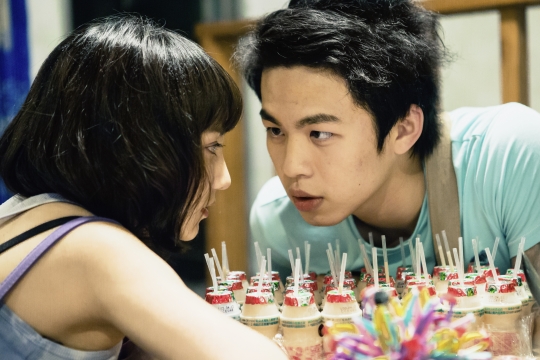 The camera follows closely on the heels of two brothers – one gay, the other straight. Both are looking for a job in order to survive. But both are also looking for themselves and long to find a foothold in life. The younger brother sells vegetables at the market where he meets a young woman who cannot speak but who gets up to all sorts of crazy things. The older brother is attracted to a dancer at a nightclub and finds himself drawn into some shifty business. Taking its cue from the rhythm of their wanderings, the film stays very close to its protagonists, showing them in lonely moments at the river, rambling boisterously through Taipei’s club scene by night, among barkers at the market, and in quiet moments together. Again and again the tone and hence the mood of the film changes. Zui Sheng Meng Si proves once again that young Taiwanese cinema does not have to avail itself of classical storytelling to fascinate its audience. These are lives in limbo, without fixed coordinates. In this way the film evolves into a portrait of manners, and a panorama of a society that does not appear to welcome its next generation.

Born in Chiayi County, Taiwan in 1961, he took a degree in engineering before studying film until 1987. Chang Tso-Chi worked as an assistant director for Yu Kan-Ping, Yim Ho, Tsui Hark and Hou Hsiao-Hsien whilst, at the same time directing commercials between 1989 and 1993. In 2008 his film SOUL OF A DEMON screened in the Berlinale Panorama.