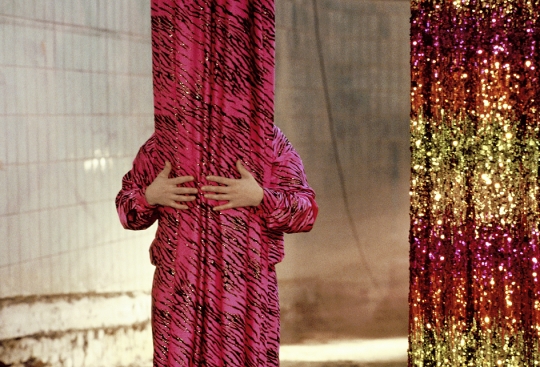 Two performers, members of an underground organization, a curtain, and pink smoke inside the remnants of an old public swimming pool. Do the curtains and fumes grant the "right to opacity" (Edouard Glissant) to the bodies that they mask and disguise?

Pauline Boudry and Renate Lorenz have been working together in Berlin since 2007. They produce installations that choreograph the tension between visibility and opacity. Their films capture performances in front of the camera, often starting with a song, a picture, a film or a score from the near past. They upset normative historical narratives and conventions of spectatorship, as figures and actions across time are staged, layered and re-imagined. Their performers are choreographers, artists and musicians, with whom they are having a long-term conversation about the conditions of performance, the violent history of visibility, the pathologization of bodies, but also about companionship, glamour and resistance.