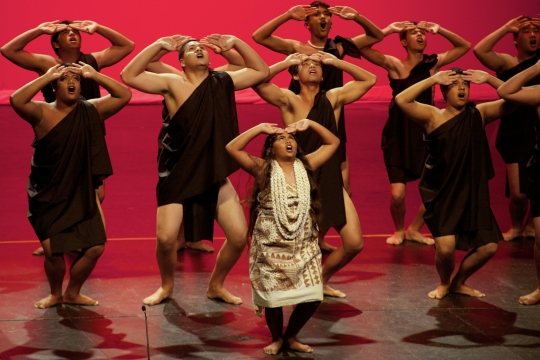 She feels more like a boy than even most boys. This documentary follows eleven-year-old Hawaiian girl Ho’onani who dreams of leading her school’s traditional hula group. Hula is a mixture of dance and theatrical performance that is central to the culture of the Hawaiian people and requires a lot of practice. Here too, Ho’onani would like to dance on the boys’ side. Normally she wouldn't be allowed to do so but Ho’onani is fortunate to have as her teacher the charismatic Kumu Hina, who assigns Ho’onani a special place in the middle. In ancient Hawaii there was always a life between genders, and a place for those who embrace both men and women. Kumu Hina knows what she is talking about for, twenty years ago, she was a man. Kumu Hina uses her profound knowledge to convey to her pupils the culture of their ancestors – a culture that has not been forgotten, in spite of years of influence by Christian missionaries. The magic word is ‘aloha’, meaning a life in harmony with nature. It also means that every man and every woman should be loved, respected and valued.

Born in Oil City, Pennsylvania in 1964. Frustrated by the limitations of traditional human rights work, he turned to film as a way of reaching wide audiences with  stories that would inform and compel people to act.