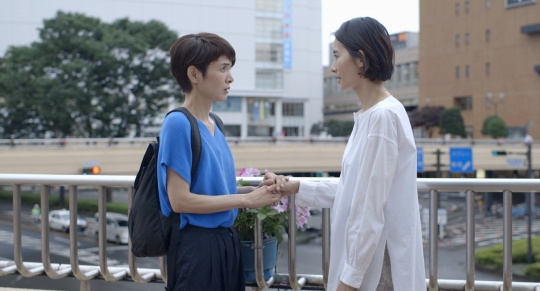 As with the rest of his oeuvre, duplication and mirroring of female characters once again informs Ryusuke Hamaguchi’s latest work, Guzen to sozo. It would not be out of place to make a literary analogy and, if one were to regard his two previous films (Happy Hour and Asako I & II) as novels, this new work could be described as a collection of short stories. The film’s recurring rhythm amplifies this effect. The three episodes, which each revolve around a woman, are in turn divided into three movements, like a piece of music. They tell stories of an unexpected love triangle, a failed seduction trap, and an encounter that results from a misunderstanding. The fragmentation serves to emphasise rather than undermine the exquisitely organic storytelling and mise en scène. Although most of the action takes place in a single space and involves just two actors, not once does it feel like filmed theatre. The secret lies not only in the writing, but also in the notion of a more complex temporality in each episode that flirts with science fiction in the final instalment. The moments we witness are crystallised into touching universal destinies marked by choices, regrets, deception and coincidences. They are the film’s true protagonists.

After graduating from the University of Tokyo, he worked in the film industry for a few years before entering the graduate film programme at the Tokyo University of the Arts. His graduation film, Passion, screened at San Sebastian Film Festival in 2008. His 317-minute opus Happy Hour premiered at Locarno and went on to screen and win awards at numerous film festivals. Asako I & II was selected for the competition at Cannes in 2018. He also wrote the screenplay for Kiyoshi Kurosawa’s Wife of a Spy, which won the Silver Lion at Venice in 2020.