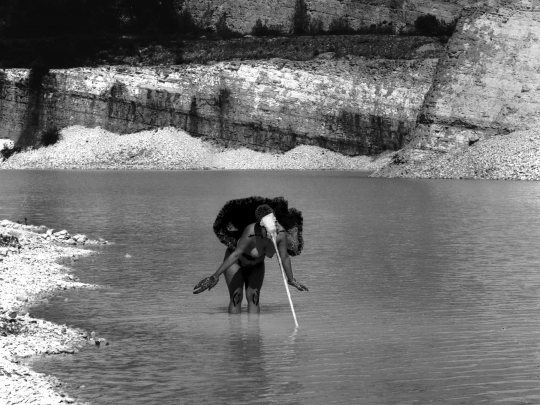 Looking like a rediscovered film reel from the early days of cinema and with its “animal drag” costumes, this Dadaist nature documentary imagines a utopia where any and all life forms are equal. Fabulous creatures that defy the binary classification of male and female and the division between human and animal go through the classic cycle of birth, courtship, reproduction, parental care and predatory behaviour.

Born in 1987, the freelance artist, filmmaker and writer graduated with a degree in fine art from the Braunschweig University of Art in 2020. His cinematic, photographic and installation works form a universe which foregrounds a playful approach to the figurative and otherness, intentionally sowing confusion, questioning the boundaries of heteronormativity and social constructs, utilising alienation effects and connecting them with allusions to and adaptations of film-historical styles – as an antithesis to naturalistic portrayal.

Born in Rosenheim, Germany in 1993, the filmmaker and artist studied fine art with a focus on sculpture at the Braunschweig University of Art. She works with diverse forms which are based on costume design and with which she develops all kinds of characters. Her recombination of elements from pop culture and the animal world creates hybrid, gender-fluid identies which lead to film or photographic works or are further developed as part of site-specific installations.