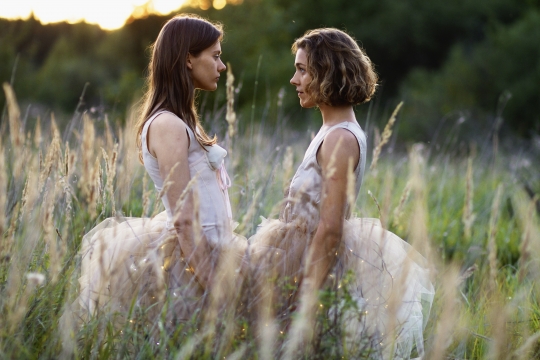 Seventeen-year-old Sangailė is mesmerised by the dance-like loop-de-loop and pirouettes of acrobatic pilots. She herself suffers from vertigo and could never imagine sitting in a cockpit. A quiet and introverted girl, she is spending her summer in the countryside at her parents’ holiday home where she tries to see the local air shows as often as she can. This is where she meets Auste, who lives out her days with impressive confidence and plenty of imagination. Sangailé is fascinated by Auste’s natural assertiveness. Together the girls sample everything that life in the country has to offer. They soon become close and, when Sangailė shares with Auste her most intimate secret, it gives her a sense of security she has never known before and provides her with the courage to fly for the first time in her life. In buoyant, cinematic images suffused with light Alanté Kavaïté brings together the isolated emotions of two very different girls in the universe that is young love. In her sensitive, intensely sensual film, she tells the story of their intimacy, their passionate devotion and delicate collisions; their vulnerability and sense of trust.

Born in Vilnius, Lithuania, she first worked as an actor and played the leading role in JAZZ (Raimundas Banionis, 1992). She subsequently emigrated to France and studied at the École Supérieure d’Arts in Avignon and later, specialising in photography and video, the École nationale supérieure des Beaux-Arts in Paris. She made her directing debut in 2006 with FISSURES, for which she also wrote the screenplay. She currently lives and works in France.